The roll of Dural’s fallen soldiers from World War One is located within the Dural Memorial Hall, which was opened on 4 November 1925.

Service number: 2583
Rank: Private
Regiment: C Company, 19th Battalion, Australian Infantry
Age: 23
Place of enlistment: Dural
Date of death: 14 November 1916
Place of death: Flers, France
Battle: The Somme
Memorial/cemetery: Warlencourt British Cemetery, France
Relationships: Son of John Adam and Sarah Breckell of 127 Robson Street, Everton, Liverpool, England.
Civil employment: Orchardist
Details: Charles Breckell worked at the Government Demonstration Orchard at Dural. He spent much of May to October 1916 in hospital, suffering from a gunshot wound to his hand and then eyesight problems. In November he was reported missing after an attack on German lines.  His death was confirmed in July 1917.

Service number: 3839
Rank: Private
Regiment: 1st Battalion, Australian Infantry
Age: 27
Place of enlistment: Sydney
Date of death: 5-8 May 1917
Place of death: France
Battle: Second Battle of Bullecourt
Memorial/cemetery: Villers-Bretonneux Memorial, France
Relationships: He was the son of Joseph and Ada Elizabeth Kent of Walworth, London.  He was born in Rotherhithe, London, but grew up in Barnes, Surrey.  He was married to Rose Emerson Kent of 268 Salisbury Rd., Richmond, Surrey.  Her name is written in as next of kin on his attestation paper at a later date. His service record also mentions stepchildren Charles, Benjamin, Alma, and Joseph Hughes, and a brother, Joseph A Kent.
Civil employment: Orchard Hand
Details: The identification of this soldier with the “J Kent” on the memorial is tentative. 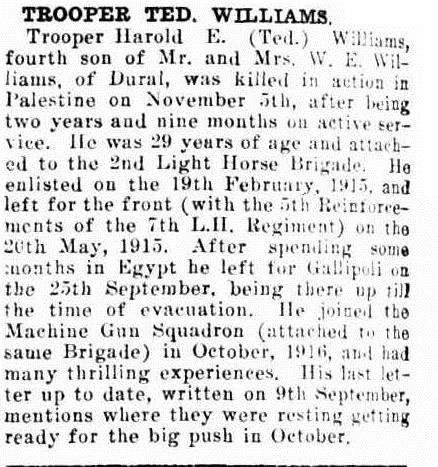