There are a number of introduced species in Hornsby Shire that significantly threaten our native animals and vegetation, with rabbits, foxes and Indian mynas topping the list.

What is a ‘pest’ animal?

Under the NSW Local Land Services Act 2013, certain animals have been declared by the Minister for Primary Industries as pest species. This is due to the damage they cause to Australia's ecosystems and agricultural industries. Two declared pests that occur within Hornsby Shire in significant numbers are the European rabbit (Oryctolagus cuniculus), and the European Red Fox (Vulpes vulpes).

Since their introduction to the country, European Rabbits have caused untold damage to Australia's ecosystems and agricultural industries. They are an ongoing problem in Hornsby Shire, impacting native vegetation, residential lawns and gardens, and causing soil erosion through grazing and burrowing activities.

For large land managers, wild rabbit populations are difficult to control. Baiting is ethically controversial and trapping is labour intensive and beyond the ability of Council to make a significant impact on rabbit numbers.Hornsby Shire Council, together with other organisations is involved in broader and more effective initiatives such as the release of biological control agents. Shooting of wild rabbits is also periodically undertaken in specified Council parkland areas by professional contractors.

Much of the land in Hornsby Shire is privately owned or managed by other agencies. For wild rabbits in National Parks or Nature Reserves (e.g. Berowra Valley, Ku-ring-gai Chase, Lane Cove, Marramarra, or Muogamarra) contact the New South Wales National Parks and Wildlife Service (Chatswood) on 8448 0400 or visit www.nationalparks.nsw.gov.au

For small properties, Council has a limited number of cage traps available for residents to borrow free of charge. Captured rabbits can be taken to local vets for euthanasia. Once wild rabbits are removed from an area, ongoing monitoring for re-invasion is necessary. Coordinating trapping and monitoring with your neighbours is essential. To request a trap submit a service request or phone Council on 9847 6666.

Never release unwanted rabbits into bushland or parkland. This is cruel to the rabbit and simply makes the rabbit someone else’s problem. Instead, consider selling or giving the rabbit away. If this is not possible contact one of the following organisations:

For more information on wild rabbits and their control visit:

Foxes are a major threat in the survival of our small native animals. There are also frequent reports of foxes hunting poultry from residential and rural areas.

Roles and Responsibilities under the NSW Biosecurity Act 2015

The Greater Sydney Regional Strategic Pest Animal Management Plan outlines how Government, industry and the community can work together and share the responsibility to eradicate, contain or manage pest animals across the region. Local Land Services supports the delivery of pest animal management activities and also have a regulatory role under the NSW Biosecurity Act 2015. Local Councils do not regulate pest animals and cannot control foxes on private properties, National Parks or any areas other than land parcels owned or managed by local councils.

What is a ‘nuisance’ animal?

All native birds, reptiles, amphibians and mammals (including brush turkeys, magpies, Sulphur-crested cockatoos and brush tailed possums) are actually protected in the State under the NSW National Parks and Wildlife Act 1974. 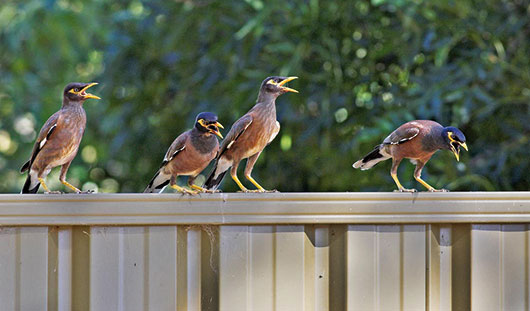 Since their introduction to Australia in 1862 Indian myna birds have had a devastating effect on our local wildlife. This intelligent but aggressive species displaces native birds, ejects nestlings and eggs of native birds from their nests and competes with native wildlife for food and habitat.

Within Hornsby Shire Indian mynas have been identified as a feral, invasive species found mainly in the commercial areas and to a lesser extent in the rural and suburban areas.

What can you do to help?

Many resources exist which help to easily access additional information on pest species and their management.

PestSmart Connect is a web-based toolkit of information on best practice pest animal management in Australia.

NRM Notes is a newsletter designed to keep all Australian NRM regions up to date with the latest developments and current projects associated with invasive animal research.