History of Hornsby Park and the fountain plaques

Hornsby Park was originally set aside as a government recreation reserve in 1896 on part of the original Thomas Higgins land grant of 1836. It was extended in 1911 and the Council became the trustees of the park in 1918. A third plot was designated a reserve in 1936 and all were amalgamated into one lot in 1974.

Construction of the Bicentenary Fountain

At the beginning of 1967, the then Shire President (Mayor) Donald Tulloch attended a dinner at Koala Park Restaurant with representatives of local service clubs, Chamber of Commerce and Councillors. At this dinner, the Shire President shared his proposal for the installation of a fountain in Hornsby Park as a means of “beautifying the local area”. He suggested that the fountain should incorporate a wishing well to raise funds for Hornsby Hospital.

In December of the same year, it was resolved at a Council meeting that a fountain be erected in Hornsby Park. The following February, Council approached the Hornsby & District Chambers of Commerce for help with the funding, however, their preference was for the construction of a toilet block. In May 1968, a motion was carried that the cost of the fountain would be fully covered by Council. It was estimated the combined cost of the fountain and the monolith which would form the fountain’s centerpiece, would be $6250.

The monolith was to be a slab of volcanic rock from the diatreme of the ancient volcanic intrusion in the valley below Hornsby Park, Old Mans Valley. However, this rock proved to be too brittle, so ultimately a slab was brought in from the volcanic intrusion at Prospect in Western Sydney. The fountain was to be located in the park where the old bandstand once stood before it’s removal in 1962.

A three metre slab of granite weighing approximately 13 tonnes was installed in Hornsby Park in July 1970, causing quite a stir amongst local residents. The Advocate declared that “the monolith had won itself stares and glances just because of its sheer stayput character”. One local from Normanhurst was quoted in the paper as saying “I’m very proud of it. It’s very fitting and, to me, very Australian – rugged, like we’re supposed to be”. Another local from Asquith said “A fountain, is that what it’s going to be? I noticed it the other day and thought Hornsby had gone all modern”. The report in The Advocate concluded by saying “from all accounts, the stone, for its mere size, impresses: with its hues of grey tone variations, it arrests. It stands there, rooted among the flora with a lumpishness, overbearingly solid”,

The fountain when completed in the ensuing months, consisted of the slab of granite in an octagonal-shaped pool surrounded by seven jets set into small rocks and a tiled base enclosed by a low concrete wall covered with ivy. Despite suggestions at a council meeting in August, there was no music added but coloured lights to illuminate the fountain at night were incorporated into the design. There was much discussion regarding the naming of the fountain but it was finally decided that it be known as the “Bicentenary Fountain” to commemorate the 200th anniversary of Captain Cook's landing in Australia. A plaque was laid that read:

“This Fountain was erected in 1970 to commemorate the 200th anniversary of the discovery and exploration of the east coast of Australia by Captain James Cook”.

In May 2006, in response to evolving community understanding, Hornsby Shire Council approved the placement in Hornsby Park of a brass plaque acknowledging the Traditional Custodians of the land comprising Hornsby Shire. The new plaque would recognise the Darug and Guringai people as the traditional owners of the land and relate their custodianship and connection to the land. The wording on the plaque was decided in consultation with representatives of the Darug and Guringai people.

“Hornsby Shire Council acknowledges that when Captain James Cook claimed possession of the east coast, the land which is now Hornsby Shire had already been occupied by the Darug and Guringai Peoples for many thousands of years.”

Council endorsed the recommendation of the Darug and Guringai people to install the new plaque alongside the original plaque on the Bicentenary Fountain in Hornsby Park. This site was chosen as it was considered a significant location for Indigenous people. Hornsby Mall was also considered and although a prominent location, it was considered to be too commercial and not suitable as a place for quiet reflection. The Hornsby Area Residents for Reconciliation (HARR) supported the proposal and acknowledged that the placing of the new plaque next to the existing plaque demonstrated the shift in Council and community understanding and attitudes.

A plaque unveiling ceremony was held on 23 July 2006. The plaque was unveiled by the then Mayor Nick Berman and assisted by Auntie Edna Watson, a Darug Elder and Tracey Howie, a representative of Guringai Tribal Link. Uncle Wes Marne officiated at a traditional smoking ceremony, where everyone was invited to walk through the smoke as a symbolic act of cleansing. Mayor Berman said “People now recognise that Australia was not "discovered" by James Cook.  Indeed, the first Australians had been living here for many thousands of years before Cook claimed British possession of Australia.”

The plaque was seen as an example of Hornsby Shire Council’s ongoing commitment to reconciliation in the Northern Sydney region and its installation a way of raising community awareness of local indigenous history and heritage.

Removal of fountain and plaques

At a Council meeting in July 1996, permission was given for Council’s Parks and Landscape team to lodge a development application for a major upgrade of Hornsby Park. The plans proposed for the removal of the Bicentenary Fountain and upgrading of the existing playground and picnic facilities.

Removing the fountain was given further credence when a Heritage Assessment of Hornsby Park undertaken on behalf of the Council, found that “the sighting and founding of the fountain and design of the fountain did not consider the historic fabric of the park and that Cook’s landing had little direct relevance to Hornsby Shire. Moreover, the fountain is little esteemed by the community and has no aesthetic value, it therefore has negligible heritage significance and should be removed”. However, in 1997 Council decided the fountain was to be retained as it was “an area that people enjoyed”.

More than a decade later in 2011, a heritage report produced for the proposed redevelopment of the aquatic center, declared the fountain to be of low heritage value and “a visually intrusive element that intruded upon the integrity of the layout planned in the early 1930s”. In 2012, the Bicentenary Fountain was turned off during the Aquatic and Leisure Centre redevelopment and the plumbing was never reconnected. Two years later in 2014, it was agreed that the fountain be demolished as it “had seen better days” and the fountain pool no longer met safety standards. The fountain pool was subsequently removed leaving just the monolith centerpiece.

In 2016, Council’s Parks & Landscape team proposed to remove the fountain as part of the works approved under the Aquatic Centre development application. The fountain was considered an introduced element in the park and therefore not integral to the park’s core heritage so its removal was not objected to on heritage grounds, subject to photographic recording and retention of the commemorative plaques.

Tenders were called for in May 2016 for the demolition and removal of the old fountain. The monolithic granite centerpiece was to be salvaged. The proposed alternative siting for the stone was in nearby Quarry Road, Hornsby, where it was planned that it would be reused as part of a future recreation upgrade proposed for the old quarry site and facilities. However, when the fountain was removed from Hornsby Park in June 2017, the monolith was relocated to Fagan Park in Galston to feature in the Japanese Garden there.

After the removal of the fountain, the plaques were salvaged and discussions took place between Council and the Hornsby Aboriginal and Torres Strait Islander Consultative Committee (HATSICC) about the most appropriate way to reinstate them and explain their history.

It was agreed that a new plaque would be erected in the forecourt of Council chambers which retained the wording of the Indigenous recognition plaque. The new plaque is fixed to a sandstone base that features hand carved animals representing the totems of the Guringai and Durug tribes.

The original fountain plaques were retained by Council as an historical record. 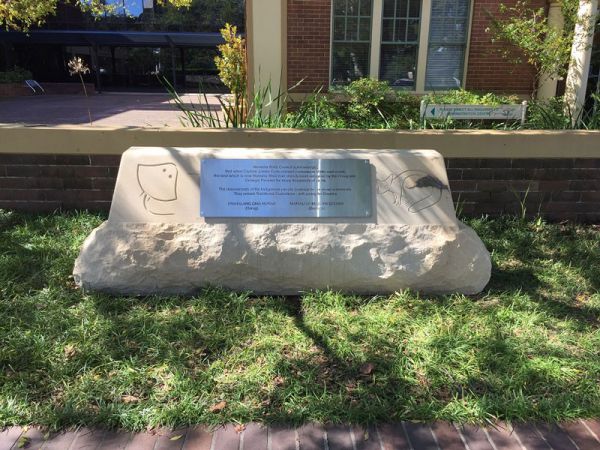 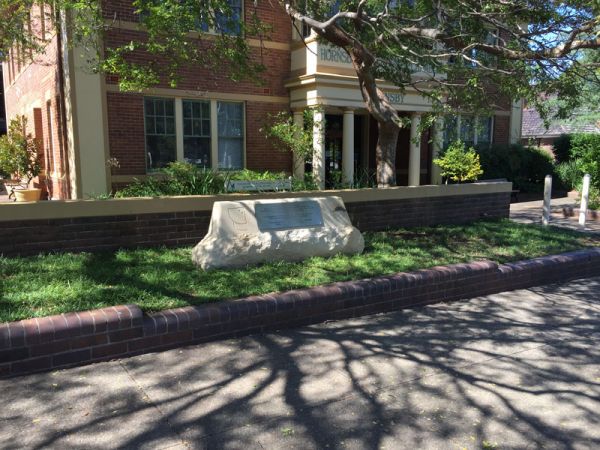 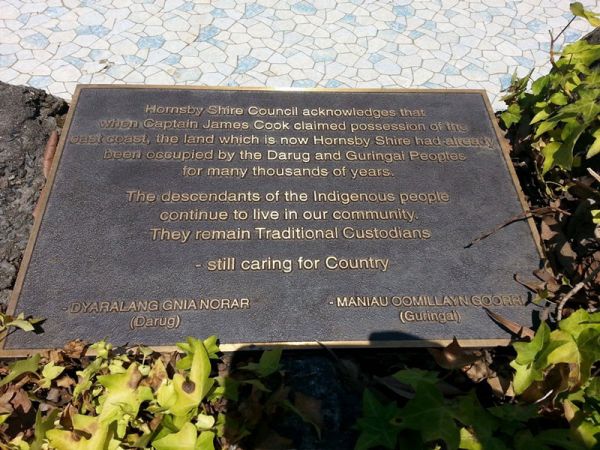 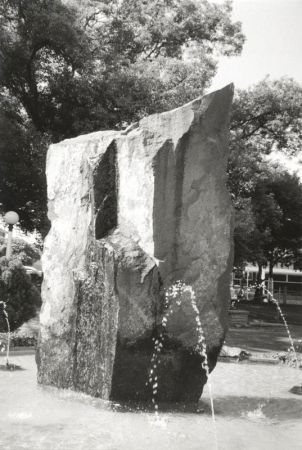 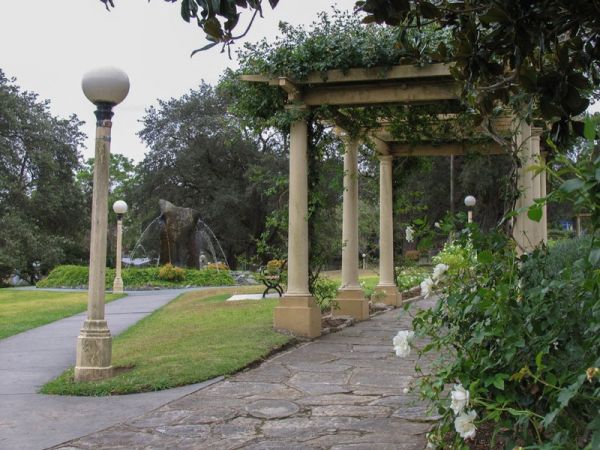 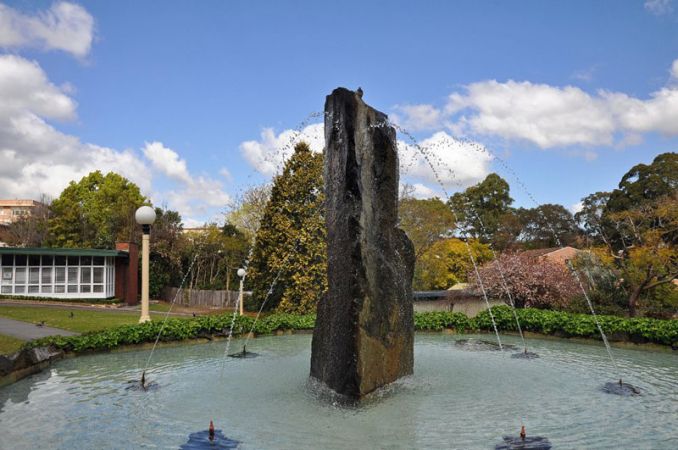 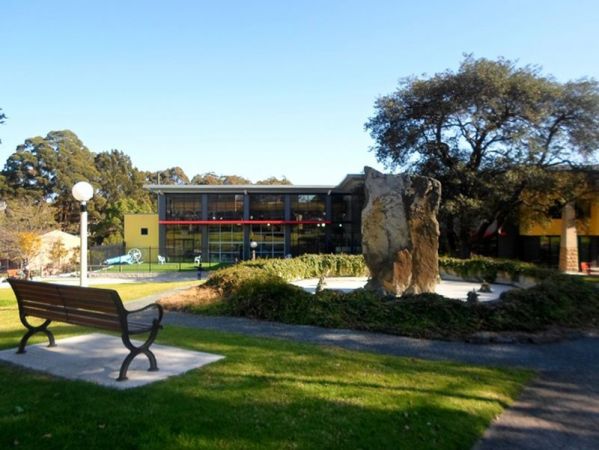 Construction of the Bicentenary Fountain

Removal of fountain and plaques