Take a journey through the key dates of Hornsby Shire history.

Before 1788 - The original occupants of the region were Aboriginal people from the Dharug and Ku-ring-gai language groups. They lived in the district 15,000 to 20,000 years before European settlement. Find out more about local Aboriginal history.

1788 - "Discovery" of the Hawkesbury River by Captain Arthur Phillip.

1789 - Naming of the Hawkesbury River by Captain Arthur Phillip during his second voyage in July. He named the river after Charles Jenkinson, 1st Earl of Liverpool, who at that time was titled Baron Hawkesbury.

1820s - Building of the Great North Road begins to open up the western side of the Shire around Epping, Pennant Hills, Dural and Wisemans Ferry. 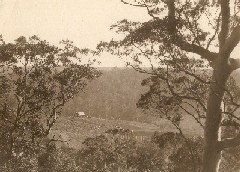 1827 - Thomas Edward Higgins takes up a grant of 250 acres in Old Man Valley, becoming the first permanent white settler in Hornsby. Meanwhile, Solomon Wiseman begins operating a ferry crossing at what would later become Wisemans Ferry. The first settlement is pictured on the right.

1830 - Constables Samuel Horne and John Thorne shoot bushranger John MacNamara. This leads to the troopers being granted land in the Thornleigh and Normanhurst area. Samuel Horne names his "Hornsby Place" and the name of Hornsby is born. The area is later renamed Normanhurst and Hornsby Junction is renamed Hornsby.

1830s - George Peat carves out a track between Old Berowra Road and the Hawkesbury River at Peats Ferry. This opens up the eastern side of the Shire along what is now the Pacific Highway.

1862 - Saint Paul's Church of England at Pearces Corner, Wahroonga, is erected but later replaced with a brick building.

1898 - The last of the new main line stations is opened at Cheltenham. 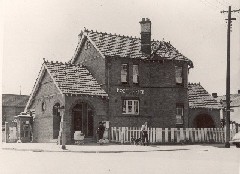 1907 - Council meets in the Hornsby School of Arts Building and later in the year Council moves to 5 Jersey Street. Shire population estimated at 4,700.

1915 - Railway platform at Asquith opens. Council moves from Jersey Street to a single storey building on its present location.

1929 - Electrification of railway line from Strathfield to Hornsby.

1960 - Asquith Boys High School Stage 1 completed and in use by mid June.

1968 - Stage 2 of Westfield Shopping Centre opens. It is four times the original size.

1970 - Old cannon built in 1877 unearthed on the construction site for new library and Council buildings. Cannon is subsequently put on display at the Victoria Barracks. 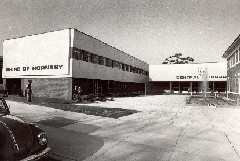 1993 - Water Sculpture by Victor Cusack is unveiled in the Westfield Shopping Mall (pictured below).

2001 - Stage three of the Westfield Shopping Centre opens at Hornsby. Population of the Shire 145,968.

2003 - Work starts on the building of a Sporting Complex at Dartford Road Normanhurst.

2013 – Stage One of the Hornsby Mountain Bike trail opens at Old Mans Valley in February. 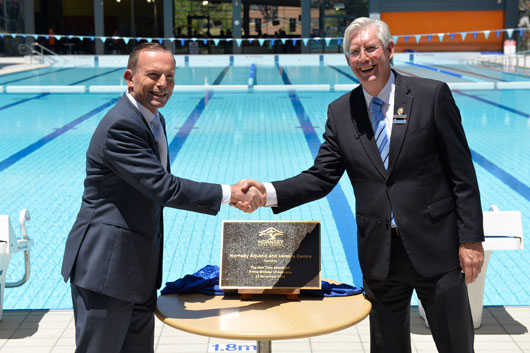