Subscriptions for the Berowra War Memorial began in the 1920s and in March 1932 it was unveiled on the Pacific Highway.

In 1987 the memorial was moved to its present location in Gully Road because of persistent vandalism.

Some mystery surrounds one of the names on the list. It is believed E.R. Baker is Ernest Reginald Gordon Baker, but he was not a casualty of the war and it is unclear why he was added to the memorial. In fact, he did not die until 1971. If you have any information about E.R. Baker please email hsc@hornsby.nsw.gov.au.

Service number: 5058
Rank: Lance Corporal
Regiment: 4th Battalion, Australian Infantry
Age: 24
Place of enlistment: Darlinghurst, NSW
Date of death: 13 April 1918
Place of death: Strazeele, France
Battle:
Memorial/cemetery: Outtersteene Communal Cemetery Extension, Bailleul, France
Relationships: Relationships: Brother of Miss A. Coyle of Baron Avenue, Darlinghurst, NSW
Civil employment: Storeman
Details: John Coyle was standing in the paddock of the local brewery when he was killed by shrapnel from an enemy high explosive shell.  His Attestation Papers have Miss Coyle’s address as Berowra. This has been crossed out and Baron Avenue has been written in its place.

Service number: 436
Rank: Lance Corporal
Regiment: 33rd Battalion, Australian Infantry
Age: 40
Place of enlistment: Hornsby, NSW
Date of death: 20 June 1918
Place of death: Villers Bretonneux, France
Battle:
Memorial/cemetery: Aubigny British Cemetery, (Somme), France.
Relationships: Son of Mrs & Mrs Edleston of Blackburn, England.
Civil employment: Carpenter
Details: Killed in action by an exploding shell while returning from repairing a telephone line.
He had previously been wounded on three occasions and his name was placed on record for “conspicuous gallantry” on 18 June 1917. He is also listed on the Hornsby War Memorial which has his name engraved as Eddleston.

Service number: 10083
Rank: Private.
Regiment: 4th Field Ambulance, Australian Army Medical Corps
Age: 45
Place of enlistment: Sydney, NSW
Date of death: 4 August 1917
Place of death:
Battle:
Memorial/cemetery: Godewaersvelde British Cemetery, France
Relationships: Son of Thomas and Martha Pickard, of Dilly Brook Farm, North Bradley, Trowbridge, Wiltshire, England.
Civil employment: Poultry Farmer
Details: On the 28 July 1917 Edward Pickard was awarded the Military Medal for “Conspicuous gallantry and devotion to duty”. On the 10th April 1917 he remained in a destroyed gun pit, which was under heavy fire, attending to the wounded and between 14th April and 18th April 1917 he “behaved excellently under heavy shell fire, and though himself badly shaken, remained on duty attending casualties”. He had previously “done excellent work” at Ypres and the Somme.
On the 28 September 1917 he was posthumously awarded a Bar to his Military Medal. The citation stated that on the 28th July 1917 “although severely wounded in three places, including a broken leg Pickard’s first thought …was for his wounded comrades” His battery position was destroyed by enemy shell fire and one man was killed and 4 others, including Pickard, were wounded.
Edward Pickard’s address at the time of enlistment was given as Berowra. 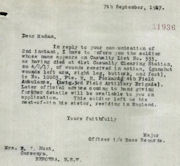