On 26 November 1918, just weeks after the guns finally fell silent on the Western Front, the people of Beecroft met and decided to erect a memorial to their fallen brothers. 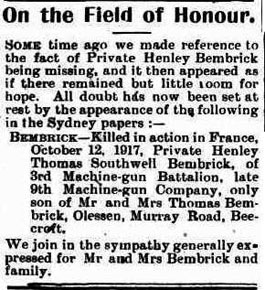 Service number: 4658
Rank: Sergeant
Regiment: 25th Battalion, Australian Infantry
Age: 31
Place of enlistment: Glenmore, NSW
Date of death: 20 May 1918
Place of death: Morlancourt, France
Battle:
Memorial/cemetery: Ribemont Communal Cemetery Extension (Somme), France
Relationships: Son of Henry George and Emma Jane Black, of ‘Kia-Ora’ Beecroft Road, Beecroft, NSW
Civil employment: Selector/labourer
Details: Died of wounds to his back after being hit by enemy shell fire while returning to the Australian trench lines working with a fatigue/working party near Morlancourt. He was previously wounded in 1916 suffering a gunshot wound to the forehead. His last words were said to be “Hooray, I’m done”. “Alwyn was a soldier of the first order,” according to the men in his unit.

Service number: 3698
Rank: Private
Regiment: 30th Battalion, Australian Infantry
Age: 20
Place of enlistment: Glebe, NSW
Date of death: 2 December 1916
Place of death:
Battle:
Memorial/cemetery: Heilly Station Cemetery, Mericourt-l'abbe (Somme) France
Relationships: Son of Ludovic and Mary Wilson Blackwood, of “Maraba”, Beecroft Road, NSW
Civil employment: Student
Details: With his father’s permission, James Blackwood ceased his law studies at Sydney University and joined the AIF at age 19. He had been a member of the Sydney University Scouts, a volunteer rifle corp. He died of wounds after being shot in the leg. He was previously wounded in August 1916. The Blackwood family was one of the wealthiest in the district and James had been destined to take over the family’s prosperous engineering business. His school, his university and his suburb all felt the loss of a talented engaging young man. His parents later gave his old school, ‘Shore’, a gift to fund a laboratory in his memory. Image: The Cumberland Argus and Fruitgrowers Advocate, Saturday 30 December 1916. 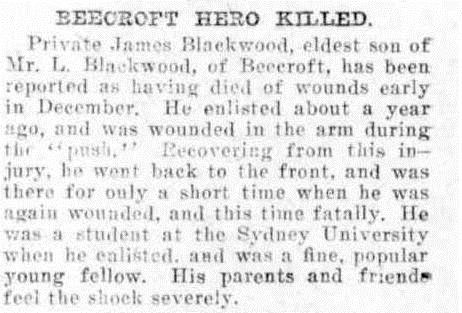 Service number: 797
Rank: Lieutenant
Regiment: 30th Battalion, Australian Infantry
Age: 27
Place of enlistment:
Date of death: 18 December 1917
Place of death:
Battle:
Memorial/cemetery: Waverley Cemetery, Sydney, NSW
Relationships: Son of Robert Cadden, of Beecroft, NSW
Civil employment: Clerk and Commercial Traveller
Details: Robert Cadden junior was wounded in the face and hand while fighting at Fleurbaix, France, in August 1916. He was repatriated to Australia in March 1917 and died at the Garrison Hospital, Randwick, NSW of a heart attack due to Septic Endocarditis. He was officially listed as a causality of war. 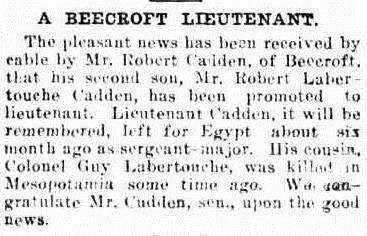 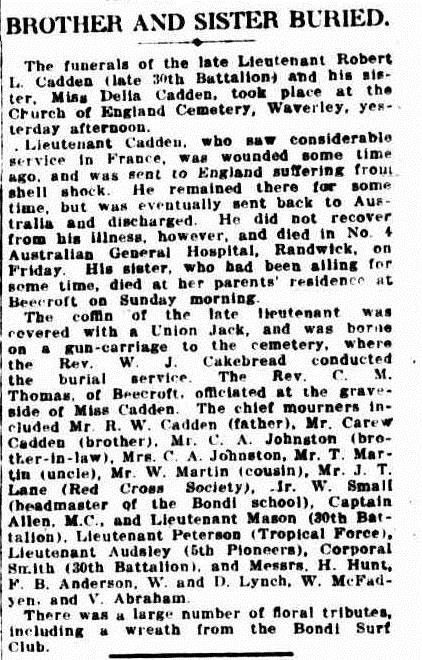 Service number: 7459
Rank: Sergeant
Regiment: 2nd Battalion, Australian Infantry
Age: 22
Place of enlistment: Beecroft, NSW
Date of death: 11 April 1918
Place of death: Amiens Railway Station, France
Battle:
Memorial/cemetery: St Pierre Cemetery, Amiens, France
Relationships: Son of Joseph and Marion Douglas, of Welham St., Beecroft.
Civil employment: Carriage Builder
Details: Killed by an enemy shell while loading regimental goods onto a train at Amiens Railway Station. A concert had been held at the Beecroft School of Arts to farewell a number of local men who had enlisted in 1917. Each was presented with various gifts such as wristwatches, safety razors or pipes. Sergeant Douglas spoke at the concert about the value of ‘Win the War’ leagues and recommended one to be established in Beecroft. Although his wish to establish the League transpired, he sadly did not return from war to see the good work done. 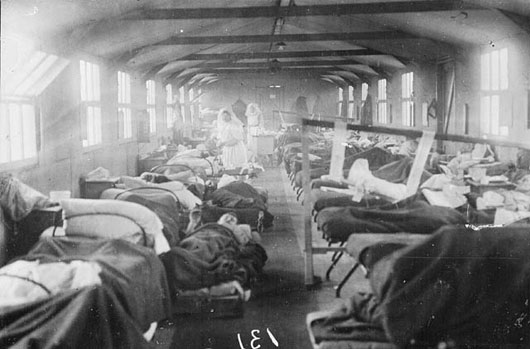 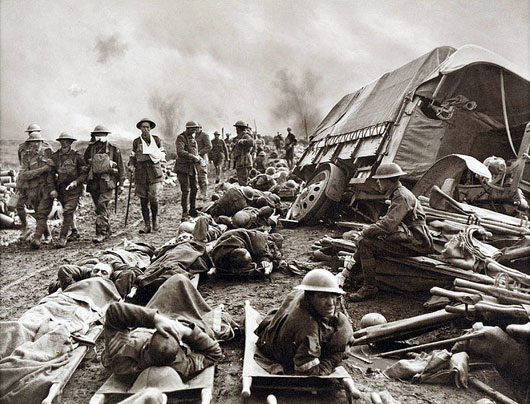 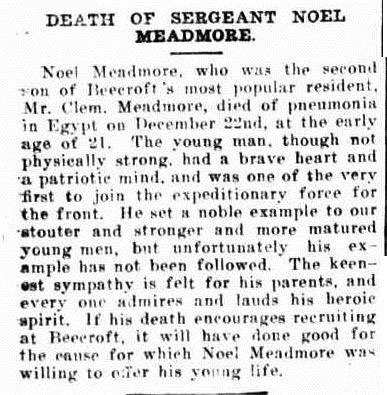 Rank: Lieutenant
Regiment: 4th Brigade Australian Field Artillery
Age: 29
Place of enlistment: Beecroft, NSW
Date of death: 24 September 1918
Place of death:
Battle:
Memorial/cemetery: Doingt (near Peronne) Communal Cemetery Extension, France
Relationships: Son of William Mark Nixon and Ada E. Nixon, of Malton Rd., Beecroft, NSW
Civil employment: Architect
Details: Killed in action after being hit by shrapnel in the back. He was on duty in a machine gun pit at the time. Local girl, Florence Tucker, had intended to marry Charles Nixon, but so saddened by his death, remained single for the rest of her life.

Rank: Lieutenant
Regiment: 3rd Brigade, Australian Field Artillery
Age: 33
Place of enlistment: Sydney, NSW
Date of death: 17th September 1917
Place of death: Zonavre Wood, east of Ypres, Belgium
Battle:
Memorial/cemetery: Reninghelst New Military Cemetery, Belgium
Relationships:
Civil employment: House Steward
Details: Harold Roberts was the House Steward for Mrs Willinte of “Lorne House” Beecroft Rd, Beecroft. Mrs Willintie was also listed as his next of Kin. He enlisted in August 1914, one of the first from Beecroft to do so, and embarked for the war in September 1914 with the rank of sergeant. He was commissioned an officer in 1916, was wounded in the leg in 1917 and was killed in action by splinters from enemy shell fire.

On the 7th June 1917 he won the Military Cross for establishing a forward observation post in a captured German trench, after killing three German officers who had refused to surrender. He maintained communication by telephone and runners even though the wires were constantly cut. He was said to have acted “with great coolness and devotion to duty under very heavy shell fire and sent back valuable information to group headquarters.”

Service number: 9722
Rank: Private
Regiment: 56th Battalion, Australian Infantry
Age: 21
Place of enlistment: Beecroft, NSW
Date of death: 26 September 1917
Place of death: Polygon Wood, near Ypres, Belgium
Battle:
Memorial/cemetery: Menin Gate, Ypres, Belgium. No known grave
Relationships: Son of Horatio William and Lanty Smith, Walton Crescent, Abbotsford, NSW
Civil employment: Plumber
Details: Killed by a sniper’s bullet in the chest. He was a runner for headquarters and was on a trench inspection with the regimental Colonel. He is listed as W. C. Smith on the Beecroft War Memorial and in the Red Cross records. Private Smith lived in Sutherland Road.

Service number: 3387
Rank: Private
Regiment: 35th Battalion, Australian Infantry
Age: 18
Place of enlistment: Haberfield, NSW
Date of death: 22 August 1918
Place of death:
Battle:
Memorial/cemetery: Cote 80 French National Cemetery, Etinehem, France
Relationships: Brother of Miss Alice Marie Speechley of Bank St, Molong, NSW.
Civil employment: Clerk
Details: On the Embarkation record Benjamin Speechley is listed as living in ‘Linwood’ Beecroft Road. He originally tried to enlist in June 1916 and again in August 1916. He was officially discharged in November 1916 as he was under age. He re-enlisted on 13 July 1917 when he reached 18. His unit had been involved in the battle of Amiens. He was killed in action on August 22, 1918 and was buried in Cote 80 (originally called Point 80) French Military Cemetery,  approximately 1 mile west of Bray-sur-Somme and 4½ miles south south east of Albert, France.

Service number: 3658
Rank: Corporal
Regiment: 14th Australian Light Trench Mortar Battery
Age: 36
Place of enlistment: Beecroft, NSW
Date of death: 1 September 1918
Place of death: Peronne, France
Battle:
Memorial/cemetery: Peronne Communal Cemetery Extension, France
Relationships: Son of David Young and Isabella Fraser, Cupar, Fife, Scotland and the brother of
Civil employment: Plumber
Details: Killed in action by enemy machine gun fire while advancing left of the town of Peronne.
He was recommended for the Distinguished Conduct Medal for going to the aid of a wounded officer while under heavy barrage fire. He administered first aid and took the man back to the dressing station. He then returned to his post and immediately gave assistance to the stretcher bearers while under enemy fire. It was said that “throughout the operations his coolness and determination were a source of inspiration to all ranks”. The recommendation was downgraded and he was awarded the Military Medal on the 14th January 1918.