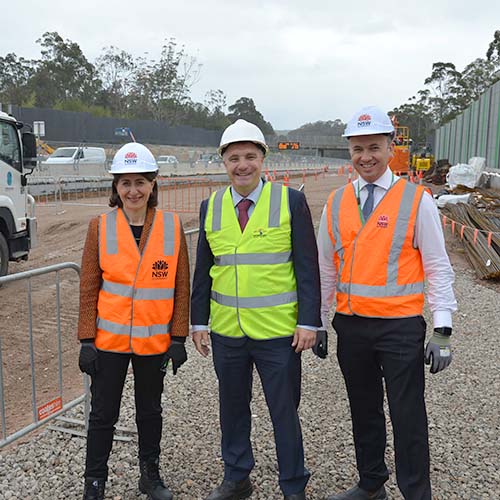 Premier Gladys Berejiklian was on hand today to witness the final breakthrough of the NorthConnex Tunnel that will bypass Pennant Hills Road.

The tense anticipation among the crowd of hard-hatted politicians, media and construction workers was palpable as they listened to the giant tunnelling machine grind ever closer.

There were cheers when the digger broke finally through, removing the last barrier to a tunnel that now directly links the freeways at either end of Hornsby Shire.

Councillor Nathan Tilbury was there, representing Council, and said everybody was aware of the historic nature of the moment.

“This is a very big deal because the people of Hornsby Shire have needed this tunnel for a long time,” Cr Tilbury said.

“Pennant Hills Road is one of the most congested roads in Australia and we are extremely grateful to the NSW Government for investing so heavily in such an important piece of infrastructure.

“NorthConnex is the missing link in our national freeway network and once it is completed it will be possible to drive from Brisbane to Melbourne without passing a single traffic light.”

The removal of traffic from Pennant Hills Road is just one of the benefits Hornsby Shire receives from the NorthConnex project.

Material excavated from the tunnel is being used to partially fill Hornsby Quarry, helping significantly with the rehabilitation of the site.

“Close to a million cubic metres of fill is being placed in the quarry and it would have been much harder to return that site to the community without NorthConnex,” Hornsby Shire Mayor Philip Ruddock said.

“This tunnel breakthrough marks a significant milestone in the quarry rehabilitation, as it means the movement of fill will now begin scaling back and should be finished within a few months.”

Council will resume control of the quarry in early 2019 and is already planning for the next stage of the rehabilitation project.

“Our staff are currently preparing a development application for the earthworks that will be required on the site,” Mayor Ruddock said.

“We will also be seeking community input to allow us to refine the vision for the Park and identify the specific recreational activities the 50-hectare park should include.

“The community has been heavily involved in this project from the beginning and Council is determined to keep it that way.

“This will be a park that is designed by the community.”