Last warning for illegal dumpers (too late for this guy) 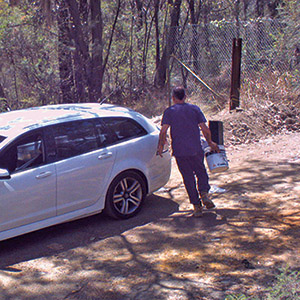 Hornsby Shire Council’s enhanced campaign against illegal dumping is already achieving results – and nobody knows it better than this criminal who received a $4,000 fine for his recent efforts at Cowan.

He was caught dumping broken tiles and other rubbish thanks to one of the 17 new cameras that are hidden throughout the Shire.

“The message to illegal dumpers is clear: we are watching and we will catch you,” Hornsby Shire Mayor Philip Ruddock said.

“The new cameras are much smaller and easier to camouflage, so there is no chance of them being spotted by illegal dumpers, and they deliver far clearer images than those we previously used.

“The cameras are monitored by a person who learned the trade spying on dangerous criminal gangs for law enforcement agencies, so catching illegal dumpers is a walk in the park for him.”

The photographed incident occurred on 29 January. We have cropped the image to conceal the identity of the offender.

“It is now harder than ever to get away with illegal dumping and we are sending this message as a final warning to anybody considering it,” Mayor Ruddock said.

“Illegal dumping is not only an ugly blight on our landscape, it is also a significant threat to the native wildlife that makes our Bushland Shire so special.

“Council has no tolerance for people who show such disrespect for our community.”