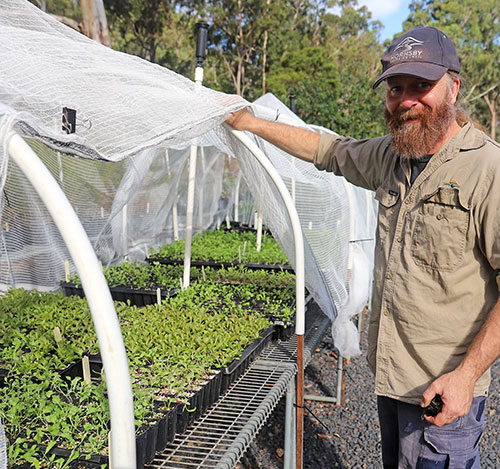 A combination of Darug and GuriNgai language words, the new name which means ‘Place of Waratah’ was endorsed by a HATSICC sub-committee comprised of Traditional Owners who met in February to identify potential names for the nursery.

The name ’Warada Ngurang Community Nursery‘ was subsequently formally adopted as a policy of Hornsby Shire Council at its General Meeting of 14 April 2021.

Auntie Tracey Howie, speaking on behalf of both the GuriNgai and Darug peoples, said;

“‘Warada Ngurang’ means the 'Place of Waratah‘ in recognition of the prolific waratahs in this region.

“We congratulate Hornsby Shire Council and the Community Nursery for their continued respect and promotion of the GuriNgai and Darug Mobs in the Hornsby Shire,” said Auntie Tracey.

“In June 2020, Council received correspondence from a community member and volunteer at the nursery suggesting that Council consider renaming the facility with a suitable local Aboriginal name.

“It was on that basis that Council resolved in part to develop a policy for assessing naming or dual naming suggestions in consultation with HATSICC, traditional Aboriginal Elders and language and knowledge holders.”

“The naming of the Warada Ngurang Community Nursery further affirms the beneficial connection that Council is forming with the Traditional Owners,” said Mayor Ruddock.

It was planned that a smoking ceremony and Welcome to Country would mark the occasion of the naming of the Warada Ngurang Community Nursery, however COVID-19 restrictions have made that impossible so far.

A formal ceremony will occur when COVID-19 restrictions permit.

However, signage bearing the nursery’s new name is in place.

More than 45,000 plants are produced each year at Warada Ngurang Community Nursery, many of which are given away to residents at our Free Native Plant Giveaways.

All the plants grown at the Warada Ngurang Community Nursery are sourced from local bushland reserves across the Hornsby Shire; either by seed collection or through other propagules.

As such, the nursery has an onsite seed storage facility to provide future plants for various projects.

Over 175 different species are propagated at Warada Ngurang Community Nursery.

The nursery is accredited through the Nursery and Garden Industry of Australia and is the only local government nursery to acquire this accreditation in the state of NSW.

The nursery won the 2014 Best Government Nursery Award in NSW and ACT from the Nursery and Garden Industry Australia, while also being one of four finalists for the national award. 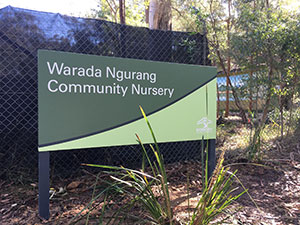