High school co-eds pitch in to help save rare forest 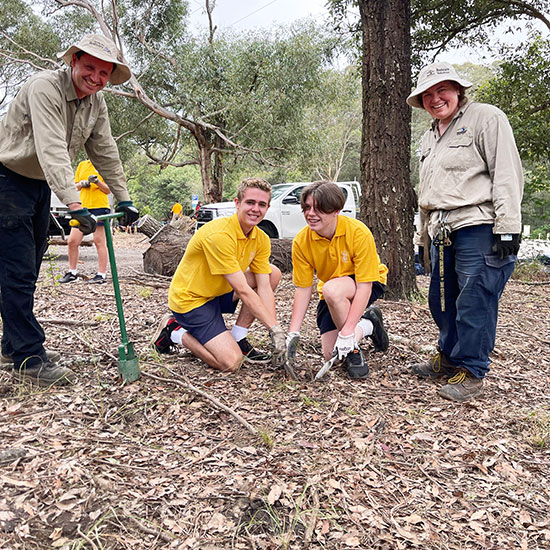 High school students have pitched in to help save one of Australia’s rarest types of forest, clinging to existence in small patches of bushland in Hornsby Shire on the northern outskirts of Sydney.

The patch of forest, Carrs Bush, is so rare in the Greater Sydney region that only one-half a per cent of the pre-1788 Sydney Turpentine Ironbark Forest remains.

Keen to help with this Hornsby Shire Council project were Year 10 students Ryan Baxter and Declan Gunther. Ryan described the experience as “overall an incredible day”.

“Although I have gone to Fagan Park a number of times, it was a truly unique experience to be able to walk through the environment and witness all of the great things that are being done to preserve the Turpentine and Iron Bark forests and to rehabilitate and replenish the previously cleared areas,” said Ryan.

As well as planting a number of native species the students were given a listening tour of the park.

For Declan, who regularly visits the park, the experience was especially revealing.

“Having lived in close vicinity to Fagan Park, I never expected its vast and unique environments to be so interesting,” said Declan

“Having gone through the bush and learned about the particular and deliberate placement of plants and wildlife, it was a fulfilling experience to plant a few trees myself and become a part of the park’s rich history.”

“That is the highest level of threat for any type of forest before extinction,” explains Petra Holland, an Environmental Scientist with Council’s Bushland Programs Team.

“So, we greatly appreciate the efforts of the Northholm Grammar School students.”

The decline of Sydney Turpentine Ironbark Forest has endangeredplants and animals that need the forest to survive – including Microbats and the Powerful Owl, Glossy Black Cockatoo and Koalas.

“This forest is not just rare locally – it is rare on a worldwide scale. This is because the only place this forest has ever existed is within what is now Greater Sydney,” said Ms Holland.

“Each year, Council and community volunteers invest funds and time in bushland restoration work at specific locations in Hornsby Shire.

“The conservation and on-ground restoration of our forests need to be accelerated and expanded.

“Critical to the success of this and similar projects is support from people, like these wonderful students, who live, study or work nearby and also those who visit these forests.”

The plants used in the project were all grown at Council’s Warada Ngurang Community Nursery in Pennant Hills. This project has been assisted by the NSW Government through its Environmental Trust.

For further information, go to https://www.hornsby.nsw.gov.au/threatenedforests