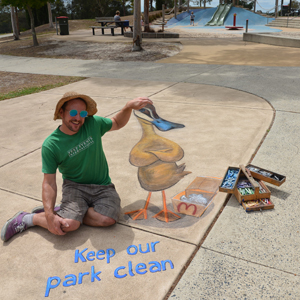 The anti-litter message at Hornsby Shire Council’s Fagan Park has been given a boost by chalk drawings of native birds, which leap out at the viewer when seen from a certain vantage point.

The anti-litter message at Hornsby Shire Council’s Fagan Park has been given a boost by chalk drawings of four native birds, which leap out at the viewer when seen from a certain vantage point.

(Click here to see a time lapse video of one of them being created: https://youtu.be/n-_n74pToJc )

“If you look at them with one eye – or, even better, through a camera lens – they appear three-dimensional,” Mr Kistler said.

“It allows the public to interact with the images, making it easier to get the message home.

“I’m always happiest when I get to use my skills for a good cause.”

A special type of chalk was used, which will allow the drawings to stay in place for a number of months.

“The artwork is really something to see and I hope it helps to bring home our message about litter,” Mayor Ruddock said.

“Litter is not just an ugly spoiler of our beautiful parklands and neighbourhoods, it has significant consequences for our natural environment.

“I’m really hoping that people at Fagan Park, and across the Shire in general, will think twice before they drop their litter on the ground.”

Other works at Fagan Park to reduce litter include the installation of three hot coal bins for people to deposit their BBQ coals, as well as banners and stickers throughout the park urging people not to be “tossers”.

This project is a NSW EPA Waste Less, Recycle More initiative funded from the waste levy.

PHOTO: Rudy Kistler with one of the artworks he has created.