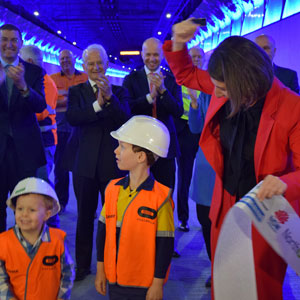 Hornsby Shire Council is celebrating the opening of the NorthConnex tunnel that connects the M1 and M2 freeways, bringing to fruition a project that Council has been advocating for very many years.

It will take more than 5,000 trucks off local roads every day, most especially the overcrowded Pennant Hills Road, helping to transform the Shire’s suburbs.

“We are extremely grateful to the Federal and NSW Governments, under the leadership of Scott Morrison and Gladys Berejiklian, for their investment in this project, which closes the missing link in our nation’s freeway system,” Hornsby Shire Mayor Philip Ruddock says.

“There is nobody in Hornsby Shire who will not benefit from this important piece of infrastructure.

“Not only will it free up our congested roads, it will also make our suburbs far more accessible and provide a tremendous boost to our local economy.

“Hornsby Town Centre is just a few minutes’ drive from the northern access to the tunnel, and many other areas of our beautiful Bushland Shire will be in easier reach for visitors.”

The $3 billion project will allow drivers to bypass 21 sets of traffic lights, reducing travel times by up to 15 minutes.

The great side-benefit to the project is that it has provided more than one million cubic metres of fill for the abandoned Hornsby Quarry, which is in the process of being transformed into a 50-hectare recreational space.

The NorthConnex Tunnel is of special significance to Mayor Ruddock, who was in Federal Parliament when the M7 was first created.

“As the Federal Member for Berowra in the 1990s, I strongly argued that there would be a bottleneck at this missing link, which is exactly what happened, and I am delighted to see that it has finally been resolved,” he says.

“I am highly grateful to the NSW Government for everything this does for our community, most especially the quieter, safer and less congested roads that it delivers.”