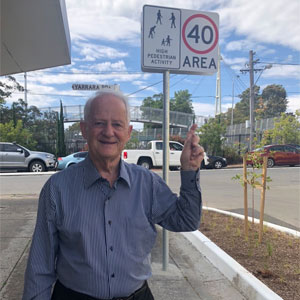 Pennant Hills town centre is now safer for pedestrians, with the introduction of a 40km/h High Pedestrian Activity Area.

Council, in partnership with Transport for NSW have installed traffic improvements throughout the CBD to endure the safety of pedestrians.

The project has been funded by Transport for NSW, with additional landscaping provided by Council.

“There was widespread community consultation prior to this project taking place and the majority was in favour of it going ahead,” Hornsby Shire Mayor Philip Ruddock said.

“There were a few people who expressed concerns about the lower speed limit, but now that it is all completed I hope they can see the benefits.

“This is about providing a safer environment for vulnerable road users, like pedestrian and cyclists as well as for drivers.

“We also seized the opportunity to plant a number of trees throughout the CBD, as part of our ongoing Shire-wide initiative that has already seen almost 28,000 trees installed,” Mayor Ruddock said.

“The ultimate goal is to increase the attractiveness of the entire Pennant Hills town centre, making it both safer and more pleasant for pedestrians.

“This is great for the local economy, as well as the general amenity of the entire suburb.

“I walk through this area every morning to get my coffee and it’s been great to hear the positive comments from locals about the changes that have been made.”

PHOTO: Mayor Ruddock in front of one of the new signs in Pennant Hills. One of the new trees and gardens can also be seen.